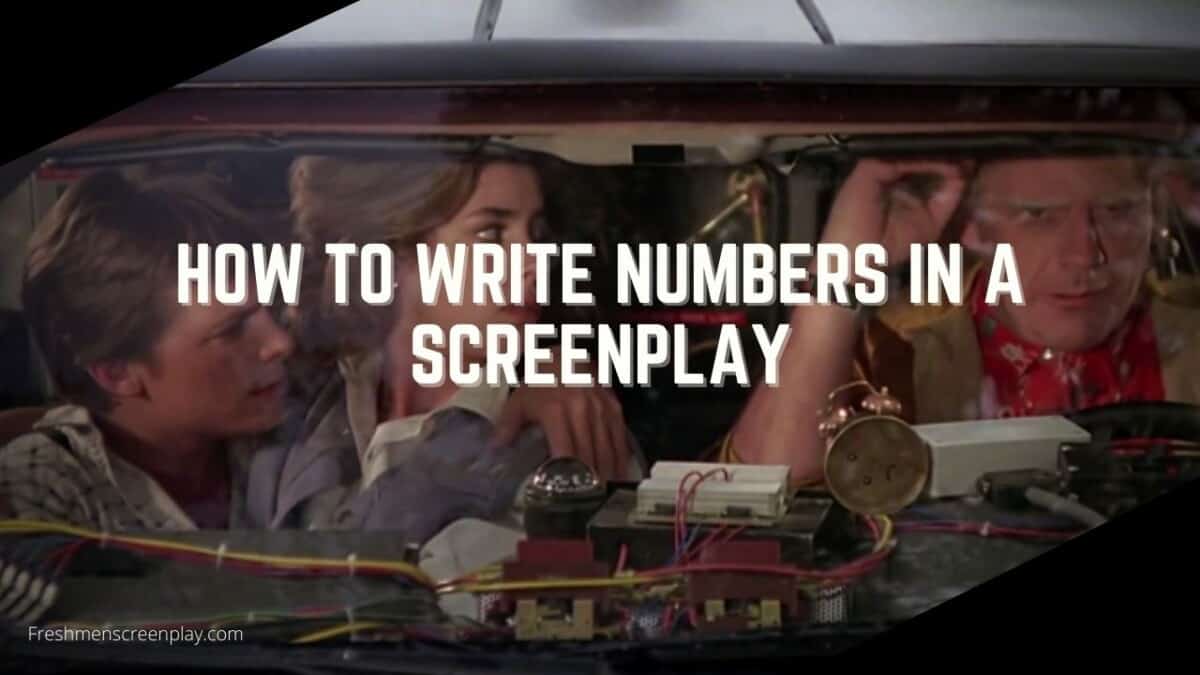 No matter what, write it out unless it’s so many numbers that it would make sense to use the numeric form. More on that in the rules section of this article below. But mostly:

Numbers are written this way because visually, it doesn’t throw the reader out of the story. It keeps them engaged and reading smoothly. Nothing throws a reader off like seeing a 67 number in a sea of words.

But this is just for dialogue. What about clock times like “4:30 AM?”

Depending on dialogue, action lines, and heading changes how you write numbers in a script? We explore every way to write numbers below.

How do you Write Clock Times in a Screenplay?

You write clock times in a screenplay by writing out the time in words only.

Unless…it’s in what we call in screenwriting a SUPER or SUPERIMPOSED subheading. Writen as:

Just know it’s something that’s imprinted on screen for the audience to see.

How do you Write Dates and Year Numbers in a Screenplay?

You write dates and years by writing them out numerically. They can also go into a SUPER subheading.

How do you Write Phone Numbers in a Screenplay?

You write phone numbers in a screenplay by writing the, out numerically, whether in dialogue or an action line.

We are so used to seeing phone numbers like this that writing them out doesn’t throw the reader off.

How do you a Character’s Age Numbers in a Screenplay?

You write a character’s age in a screenplay by using parentheses and writing the number out numerically. This is where character introductions come in. They’re written in the descriptions of scripts.

Rules for Writing Numbers in Scripts

Numbers should have a period after them.  All the examples above, whether it ends in a number or not, have a period. It’s just good grammar.

If you are writing too many numbers, use the numeric form. Say someone is reading a code or to another character, and the number is long, as in more than two.

What numbers are you writing in your script?

How to Write Numbers in a Screenplay?
Posted in Formating Help By D.K.WilsonPosted on April 18, 2021April 22, 2021Tagged numbers, numbers in screenplays, time and dates in scripts