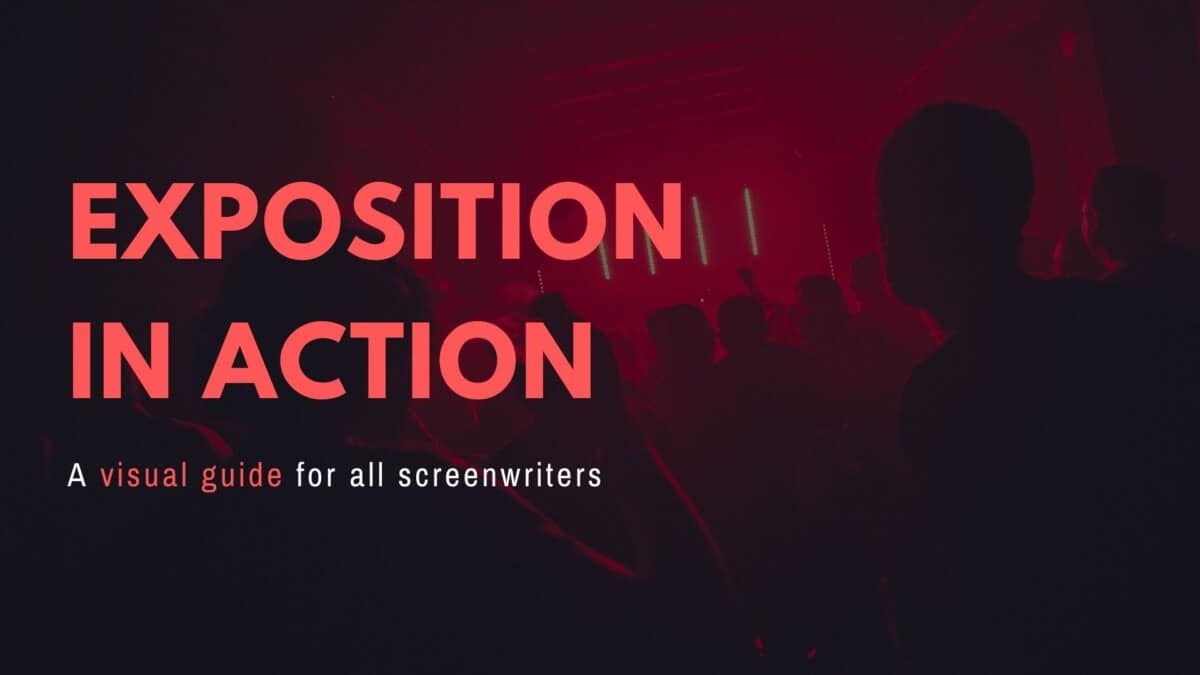 I’m writing this guide to help the newer writer understand something that took me months to learn on my own.

Writing exposition is one of the hardest things to do in screenwriting. You could easily be an amateur done incorrectly.

My screenwriting coach told me, “dialogue should never ever remotely smell like exposition.”

The thought of informing the audience without them knowing it sounds like magic.

But, visual exposition makes it easier.

Exposition is the background information inserted into a story to inform the audience about the characters, prior events, and settings—any info the audience might need to understand to go forward in the story.

One of the best examples of this is any Terminator movie opening scene or Star wars opening.

It’s littered with it.

The simplest form of exposition, which is narration.

Now lets further expand on what we’re are here to learn.

What is Visual Exposition?

Visual exposition is the background information needed for the audience to understand the story portrayed visually.

Think of the example above just with all images and no talking what so ever.

It seems to be a little harder to explain, right?

Yea, it would seem like that at first. Let’s see an example of visual exposition at work.

What information did you get from the movie from watching this scene?

You get all of this without ever saying a word of dialogue—all visual exposition.

Let’s now take a deeper dive into What this looks like from script to screen.

Is it starting to make sense? This video did it for me. The Matrix is the champ of visually explaining story elements.

But I wanted more I wanted some practical ways to incorporate the information the audience needed to know within the script.

So I went through scripts and found all four techniques.

Below are all the ways I’ve found to incorporate visual exposition in your screenplay. As you read through the examples, you notice one thing they all have to do with action lines.

Thats where your bread and butter is.

A character’s actions are, by far, the most important visually. We picture what people do far more comfortably than anything else.

Your character is an eighteen-year-old who works at an ice cream shop to save money.

Let’s look at exposition in dialogue or what you don’t want to do.

There isn’t anything technically wrong with this piece. It says everything the audience needs to know to move the story forward, but let’s see a more visual example.

See how the second one was more visual to the first.

The difference being I used more of the action lines showing characters doing things as opposed to dialogue. If you only read the dialogue, you don’t get nearly everything you need.

And that’s the key you want the action lines of your characters to be as essential as the words they speak—most of the time, more.

2.) What Happens to the Character in the World

One way that’s hard to find an example of is how the world treats your characters.

You can give background information on your character by showing how other people treat them.

If your character is a loser in high school, have other people mistreat him or her. Then have your character not respond as to tell the audience this is everyday life.

I must admit that it is a cliche example, but you get it, right?

Describing location has to be visual, and in doing so, you can give more exposition in the first couple of lines read than anything else.

But let’s look at one of my favorite examples from Little men.

This is page one of the script. What is the writer trying to say with this opening about the scene?

Everything is out of control, and this one person gets things under control. The exposition showed not said.

Now let’s go over two easier ways to give a lot of exposition in a quick visual way.

I f you want to know how to write one of these, click the highlighted link below.

Montages are an easy way to give information. One of the most popular ones is the opening scene from up.

What this does is not only creates sympathy for the main character but gives you his entire backstory in the fastest way possible visually.

Again, if you need any help learning formating and writing, click the link below.

You can use Flashbacks to incorporate vital information into a story before a scene or major event.

I personally don’t use the last two because their easier ways and Hollywood seem to have overused them in the past. But to each its own.

Why you shouldn’t use Visual Exposition

I personally think exposition as a whole isn’t something you shouldn’t focus on.

You should write as if the audience already knows what’s happening.

Because it keeps it interesting, most people or the audience is smarter than you think.

People can figure things out fairly quickly. And the questions that arise when someone doesn’t know something is the most powerful thing a filmmaker can use.

You kept watching the Matrix because you had no idea what was going on, but you wanted to find out.

One extreme example of this is the film Spartan written and directed by David Mamet.

There isn’t a piece of visual exposition in that whole film, and before you know it, it’s over. I kept watching it because I was curious to see what would happen.

So if this doesn’t come as simple to you as other parts of screenwriting, don’t sweat it.

Move on. It’s not essential, and you will get better at it as you write.

So today you learned everything you need to about visual information in screenwriting.

Visual exposition is by far the hardest to incorporate, but when done right, it makes you look more professional and gives your writing a visual feel.

To help your audience genuinely see with images.

Don’t be afraid to try and fail while writing, join groups, and do whatever you need to to get better every day. That’s the only way people break into this industry.

If you would like to hear more on this subject, read my article visual screenwriting for exact word choice.

What have you been doing wrong in your screenplays regarding visual exposition?

Whatever the answer is, I would love to hear it in the comments below.