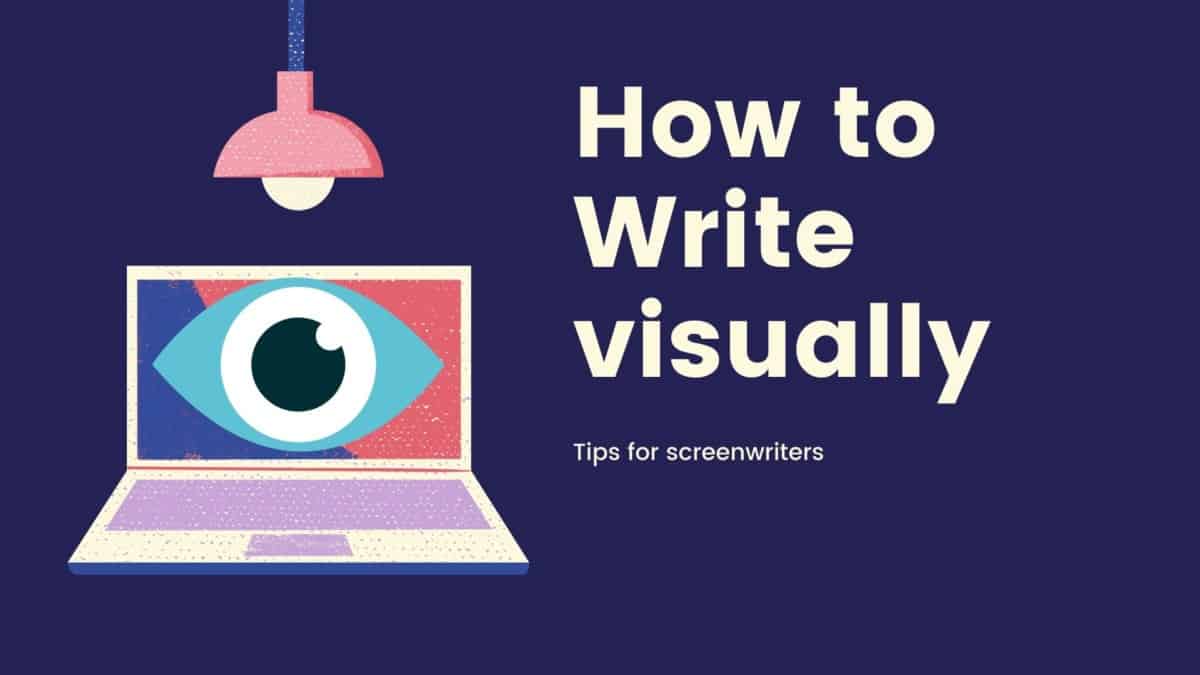 Welcome to a complete guide on writing visually in screenplays.

I created this guide because I wanted a step by step blueprint on how to use visuals.

The whole process seemed elusive to me. After analyzing the top ten scripts known for their visual writing like A Quiet Place and Lights Out, I’ve come up with this guide.

Trought this post, I will be using examples from my first script, where I first learned how to write with images with help from a professional writer.

What is Visual Screenwriting?

Visual screenwriting is the process of using words and specific detail to communicate your script in a way that the reader can see the entire film.

Like any good piece of writing, you’re able to see in images what’s precisely going on.

Have you ever read anything and your imagination ran with it?

You were able to see the coffee shop or the living room or the situation the writer was describing in real-time.

If you have, you have experienced visual writing.

Where You can Incorporate Visuals

Below are the only four places in your screenplay you’re able to use visual writing.

The first place you will able to write using images is in the location descriptions.

Think about the energy around your location.

This room seems like a place the government doesn’t particularly care about. And I picture it messy and dirty.

It can be considered the same as location descriptions. The difference being is the actions happening inside the script.

From this example, you can see the energy in the classroom.

What are people doing? They are slacking off in school.

Plenty of noise. Even though they didn’t say, people were screaming, that’s the image I got.

A character introduction is one of the most critical places to write visually. These words are the first thing the reader is going to think about the character.

This is a short description, but short ones aren’t bad for side characters.

What can we tell from this one line? Shes focused on that piano for sure.

What else? She’s warm and good looking for her age.

What a character does and how they respond shows more about them than anything.

A Prayer Before Dawn

What do you see? An angry man. A man is getting ready for battle.

The Two Senses of Visual Screenwriting

Primarily there are two senses people use when writing. Things you can see with your eyes and something you can hear in the location.

Think of a wide shot in a film.

What things are visible?

What is happening that someone could see if they were above everything?

Are people running? An empty street? If so, write that.

I know that sounds weird, but it’s true.

Whatever you would hear in your scene, write that.

Below I’ve compiled five exercises you can use while writing your script that you can use today to become a more image-based screenwriter.

What is a visual write? Its when you write your whole script just using descriptions and action lines.

I know it sounds weird.

But trust me if you do this every scene. Before you write the dialogue, it will show you that you don’t need as much talking to communicate as you think.

Only after you finished the scene with things we see and hear as well as what characters do then and only then you should write what they say.

What haven’t I communicated that I need to make this scene work?

2.) Put Your Characters in Motion

Next, what you should do is put your characters in motion when they are talking.

Have your characters doing things while they talk.

For example, walk down a hallway going somewhere. Or if they are at a table, one could be eating and the other listening.

I call this the “walk and talk method.“

Every time I have more than a page of dialogue, I think what they could be doing to advance the story other than talking.

Naturally, having your actions in action while talking makes them appear more visual in the reader’s head because you’re able to picture them doing the thing.

It’s a cheap trick, but it works.

Most writers think when writing visually, they need the right wording. More on that later.

But the location is the first image in the writer’s mind.

When writing any scene, think of the energy your location brings to the scene.

Having two kids chase each other around a house is perfectly fine.

But if you want to show how reckless they are, having them chase each other around a supermarket sounds better. Right?

You could have that heated conversation in a living room, but it becomes more visual in a fancy restaurant.

Imagine them trying to keep their voices down while getting there points across.

The more obstacles in a character’s way, the more visual the writing becomes.

But not just the obstacles you set up in the story, we are talking about physical barriers in the scene.

The purpose is to create energy.

This is fine but boring. How do we make a world? A world where Rubin and Greg aren’t in an all-white room.

“Greg hustles to Rubin, pushing people out his way.”

Any word you’re going to use to describe what a character does write something that that pops it off the page.

Don’t use walk use Stride.

Don’t use look use, Leer.

Think to yourself, how is my character doing this activity, are they upset? Angry? Happy?

Then use words that express that.

Now, this doesn’t have to bee for every verb. Only when the occasion suits it.

Do this only after you finished writing your scene.

Only after then go back and change out common everyday verbs to words that can describe more in detail what the character is doing.

One way to get better at screenwriting with images is to practice.

How do you do that?

Well, I have an exercise for you.

For this exercise, we are going to use the two screenwriting senses we talked about above. What you see and hear.

Go to these four locations:

Write everything you see and hear.

Determine the energy of the environment. Or the tone if that makes more sense.

Repeat this exercise with as many places as you want, especially if you can find a place that you’re going to write in your script.

Below I’m going to name the mistakes I’ve made when trying to write visually.

I found these mistakes by getting my scripts checked out by professional screenwriters.

Take a look and correct anything you might be doing wrong.

“She “neatly laid her sheets out.”

“He gently lifted the man.”

You’re not writing a book you’re writing a script. If you want someone to do something gently, then write it. in dialogue

Yes, adverbs are visual, but they clog up the reader and takes away from their imagination.

You want the reader to imagine his or her view of your story with your words as a guide.

You want your character’s actions to be happening as people are reading it.

The purpose is it adds to the vision of things happening as we are reading it.

3.) Directing on the Page

Directing on the page consists of telling the actors exactly how something is done. Kind of like using adverbs, but it goes much deeper than that.

For example, writing facial movements micro things like that.

“Her eyebrows raise in disagreement.”

“He raises his hands while yelling.”

You are the screenwriter, not the actor. So don’t tell them how to act.

In closing this section…

Ultimately you want their imagination to be doing most of the work.

And using adverbs, directing on the page takes away from that imagination.

So now, let’s look at ways professional screenwriters have done it.

Blade Runner because of its cinematography. The second movie is no different.

What I also like about this one is their description of how someone fights through pain.

Writing, “He feels his wounds.“

So simple yet, we can all visually see what they mean.

A quiet place is a visual writing gold mind.

Every scene has to be as vivid as possible, giving the reader image after image, with no dialogue at all.

What I like about this is the writer-actor breaks some of the guidelines I laid out in this post.

Why am I showing this example then?

To show that these methods aren’t exactly what I mean.

For a film such as this or a scene with virtually no dialogue, you do need some sort of deeper explanation.

Let’s see a script to screen example on how it’s done below.

Why is Visual Screenwriting Important?

Film is a visual medium.

So we the screenwriters have to be visual.

The producer needs to see the world we are creating—the only way to do that to write visually.

Imagine if we didn’t, and we wrote what happened and not what the characters are experiencing.

The script would be bland.

The movie industry is dependent on us to see things before the actors and directors and production designer does.

This is why it’s essential.

You now have all the keys to take what you write and pop it off the page.

It’s not the easiest thing to do at first, but after the exercises I gave you. After a couple of attempts, at least you’re be doing some version of it correctly.

If you remember anything from this, remember to describe a world around your characters.

You can’t go wrong by doing this.

I also want to tell you all the scripts mentioned except mine can be read on imsdb.com.

Please let that be your resource for any scripts you need as study material.

What did you learn about visual screenwriting you didn’t know before?

What exercises are you going to use to get better?

Whatever your answers are, let’s talk about it together in the comments below.

2 thoughts on “Visual Screenwriting: How to Write like a Professional”