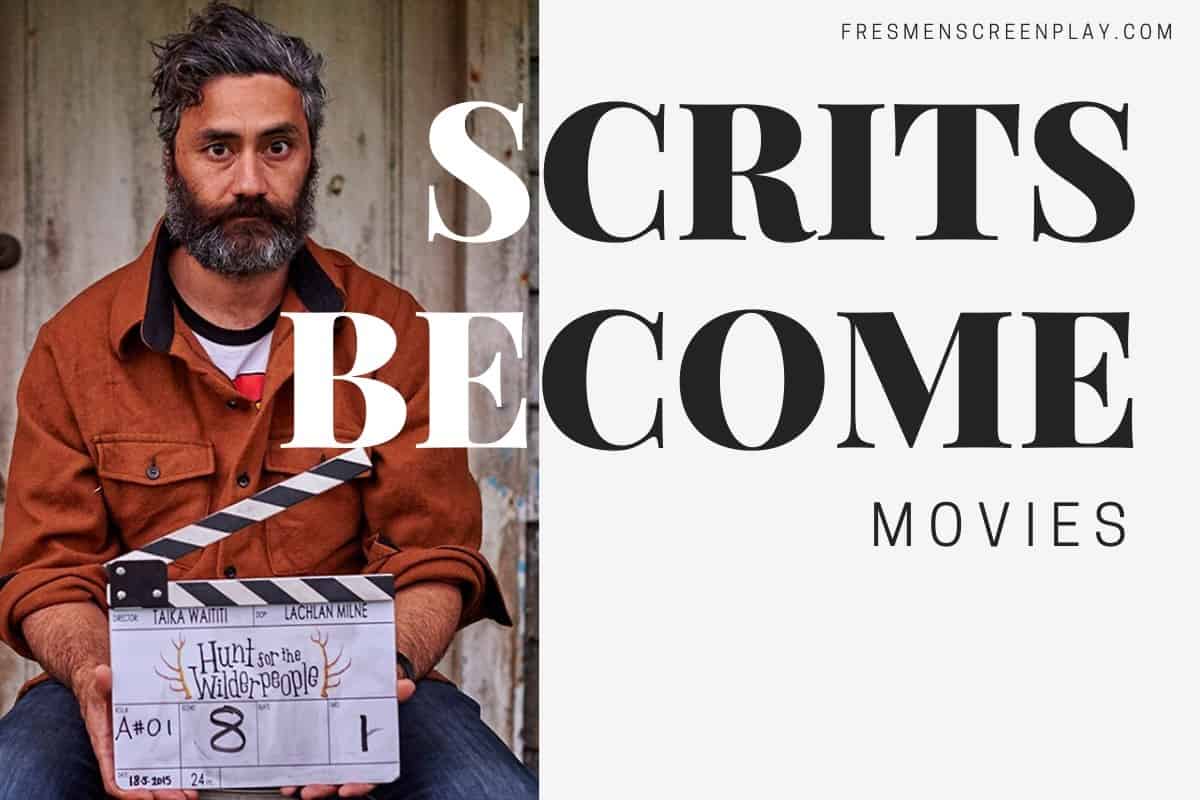 Most are not a straight forward formula. unfortunately, there is no guaranteed way. They are all built on relationships and the potential money investors can make off the script.

These include the following:

1.) A production company obtains the rights to a short story, comic, novel, etc.

Then they hire a screenwriter to adapt the material into a script.

This way the company already knows there is an audience for the script.

For example, Harry Potter sold over 400,000 books before it became a movie. Iron man was a cult classic among comic book readers worldwide before its 2008 film.

Even lower budget films like The Colour Out of Space was a popular short story written in 1927 before it became a movie.

This is the number one way today how scripts become movies which are through hiring an established trusted screenwriter to adapt an already published piece of work.

Now in order for your spec script to become a movie in this day in age lets look at the second option.

2.) Though a manager or Agent

This is how your spec script will get a chance to become a movie.

Say you’ve written a script and you want a chance to get it made. You then send a query letter to a manager or agent introducing your script you’ve just written.

For a great way to this, I wrote a whole article on where to submit your script for agents here.

The person will then ask to read your script. After reading if they fall in love with how brilliant it is they will then take you on as a client. In doing so there contact list essentially becomes yours.

The agent will then pitch the script to actors, production companies and executives they have working relationships with. The ones they know they are looking for the material you’ve written.

Once they’ve found a buyer your script is then optioned and your job as the writer is essentially done.

Yes, actors can get scripts turned into movies.

Many actors like Denzel Washington and Fences, Brad Pitt and Moonlight, Angelina Jolie and Unbroken.

How does this happen?

Normally if an actor has enough fame, power or pull they could get a script made. Mostly on the promise that they will act in it. Seeing as the production company is betting on their star power bringing on ticket sales.

But I’ve thought out a strategy for getting into these positions.

How Screenplays Become Movies in 5 Simple to follow Steps

1.) Finesse and Re-Finesse Your Screenplay

Arguably, the most important part of the entire process is the very beginning.

If you don’t have a rock-solid screenplay, then it’s never going to impress a producer, director, or other Hollywood type you need to connect with later.

You’ll even find it hard to secure an arrangement with a screenwriting agent or manager.

Most people skip this thinking that their script is already gold or worse they haven’t even written a script they just have an idea.

So what makes for a good screenplay? It’s not always exclusively about genre or style, but rather, having the fundamentals down.

Don’t just assume your screenplay is good because you’re happy with it. Have others read it, be those your fellow screenwriters or even other professionals.

As we’ve written on this blog, you may seek a mentor to guide you through these early yet crucial stages.

You could even participate in a screenwriting contest or fellowship to potentially work with pros who can sharpen your screenplay further.

The main point is to get feedback.

2.) Partner with a Screenwriting Agent or Manager

Don’t rush the first step, as it can take months, sometimes years, before a screenplay is in Hollywood shape.

While you can’t agonize over your screenplay forever, once you’re relatively confident in it, you want to prepare to shop it around. To that end, a screenwriting manager or agent can be a very valuable asset.

It’s often easier to obtain a manager, so you might want to start with them first. Your manager can further improve upon your script with you so it’s in the best possible shape.

Agents are the ones who help you get an in with producers, directors, and film studios. By the time they see your screenplay, they expect it to be darn close to perfect.

There’s no need to pick a screenwriting manager over an agent or vice-versa. Both will be immensely useful to you as you proceed ahead on the uncertain path to film stardom.

3.) Find a Producer Who Likes Your Work

On this blog, we’ve talked about how it’s important to live close to where the action is in the worlds of film and television.

For many aspiring filmmakers and screenwriters, this is Hollywood, but other major cities in the US and outside of it apply as well, such as Toronto, Austin, even Tokyo.

Once you’re at the heart of it all, network when you can and also rely on your agent to get your foot in the door. When you meet producers or directors, be that at parties, events, or anywhere else, you want to address them as people first.

This should seem familiar to you after a recent post of ours. After all, shoving your screenplay in someone’s face does not produce the best results. You want to connect with them above all else.

By touching on themes or topics a producer is passionate about during your chat, they could become interested in your screenplay. Your agent can also get the screenplay around, matching you with directors and producers they believe will be an ideal fit.

4.) Pitch the Screenplay to the Producer

Now comes one of the biggest meetings of your life. You’ll sit down with a director, producer, or even a film studio representative at their office. While you may have talked about your screenplay before, here is the time to officially pitch it.

This is going to be an incredibly nerve-wracking experience, there’s no getting around that. However, you’ve come this far, so try not to let the anxiety get to you.

So how should you handle your meeting with a Hollywood executive? Remember the pillars of a job interview, such as showing up early, dressing nicely, making eye contact, offering a firm handshake, asking questions, and knowing when to speak and when to listen.

Make sure you have a clean copy of your screenplay with you but don’t present it right away. Remember, while the producer or director may have a small interest in your screenplay, they’re not necessarily completely sold on it yet. That’s the purpose of this meeting. By pitching the screenplay to them, they may ask to see it. Only then would you want to pass off your copy.

Here are some tips for pitching your screenplay in a way that gets people asking for more:

You have more time than a 30-second elevator pitch, thankfully, but you don’t want to drag on the meeting forever. Directors and producers are busy, important people with a lot of things to do. Limit your pitch to about 10 minutes and certainly don’t exceed 20 minutes.

Know what to say:

Ten to 20 minutes can be a long time to fill if you’re just winging it. We recommend you prepare your pitch as well in advance as you can. Feel free to write down what you want to say.

Once you’ve written out a version of your pitch, practice it aloud. Time yourself as you do so, as you need to make sure you’re sticking within that recommended 10-to-20-minute time limit. If your pitch is too long, you’ll have to cut some things out. If it’s too short, that’s not necessarily a bad thing, but you also shouldn’t speak about your screenplay for only three or four minutes. You’re doing it an injustice.

Boil your story down to its best elements: What if your pitch is 30 minutes and you need to chop it down by about 10 minutes? It’s likely you’re dedicating too much time to explaining the story you’ve written. Think of the story description as more of a synopsis. What elements of your screenplay will grab the most attention? Focus on talking about those above all else.

While some artists detest the confines of genre, directors, and producers don’t mind genres because it’s easier to categorize films that way. If your screenplay fits in a certain genre with a neat little bow, make sure you mention that a time or two in your pitch.

Be confident and speak slowly yet clearly: The delivery of your pitch is important as well. If you rush through the pitch because you’re nervous, you may leave out crucial information or speak so quickly that your message gets muddled. Take your time, believe in yourself, and project that confidence in your every word.

The time is going to come to negotiate the terms of the agreement. You may want to hire a lawyer to ensure you’re getting a deal that will benefit you.

Once the terms are confirmed and the contract is signed, your movie is officially on the way to Hollywood! It can take months, sometimes years before a film goes from the screenplay stage to showing up on the big screen, but once it finally does, it will be so worth it.

While it’s a very exciting time for you, it’s also not a good idea to rest on your laurels. Make sure you keep the momentum going. Continue writing new content for a second, even a third screenplay. If you have older screenplays that you want to shop around, talk to your agent or manager. When you meet new Hollywood types, tell them that your current screenplay is being adapted into a full-length film. That ought to make it easier for you to continue getting work.

The process of a screenplay becoming a movie is fraught with lots of blood, sweat, and tears. It’s also something that doesn’t happen for every screenwriter, but if you aim high, work with the right people, and–above all else–have a really good screenplay, you could just be the next one writing amazing Hollywood movies. Best of luck!

One thought on “How Do Screenplays Become Movies Today?”