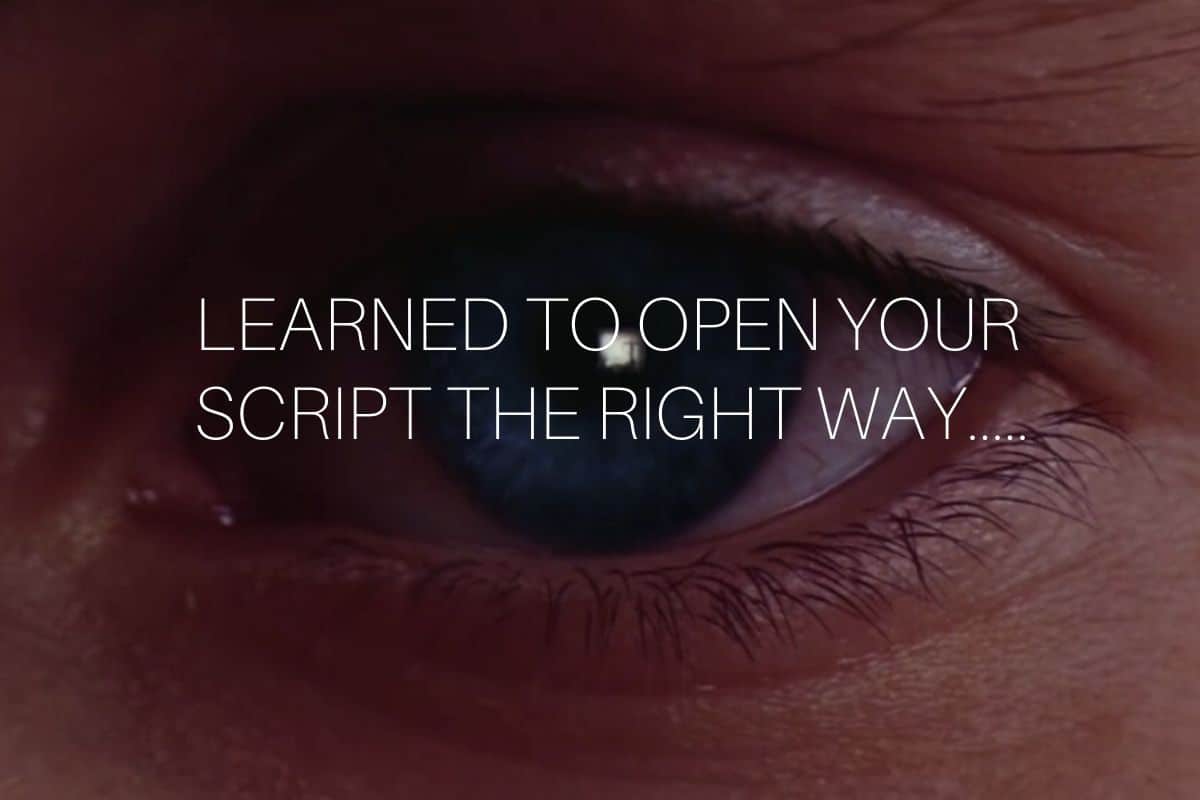 The way you open your script can determine if that producer’s assistant keeps reading or not.

Some people say you have 10 pages to impress the reader. According to produced screenwriter Corey Mandel, You have the first scene.

So what’s the purpose of the opening of your screenplay? The purpose is to set the world, mood, character and entice the curiosity of your reader.

Let’s go over some great ways to open your script that will keep the reader reading and get you to a professional level.

Conflict is what drives films. So why not start with it.

Conflict catches our attention like nothing else. For this reason, I’m putting it as number one. As humans, we have three primary functions one of them is to survive.

When we see conflict our brian becomes hyper-aware of it. You ever notice that everyone turns around at the sound of someone yelling. It’s not for the person yelling its to make sure we are safe from whatever is causing that pain.

How does this relate to film?

You have less than 10 pages to grab the reader’s attention. Grab and keep it by introducing some ideas of conflict.

Think about the famed movie Training day. In the beginning, Denzel Washington, a cop is meeting a new trannie, Ethan Hawk. What’s great about this opening scene is it introducing us to the dynamic between the two main characters but it shows us the conflict early.

This tip of conflict will be infused with other ways through to the post since its the number one way to open a screenplay.

2.) Open with a Shocking Image

Shock the reader and your future audience by giving them something they can’t look away from. This tip also plays off of conflict but instead of the first scene, it happens in the first shot.

The difference being it doesn’t give the reader all the conflict but a glimpse of it. Introducing something to discover and look forward too. Humans are problem solvers, giving them something they don’t fully understand tends to make us stick around to figure it out.

Let’s take a look at the opening image form Kill Bill volume one.

It puts you right into the action without knowing all the details. What’s shocking about it is its not just a woman dying on the floor but a woman in a wedding dress dying on the floor. And right before a gunshot, she grudges the words:

Why is a woman on her most special day bleeding on the floor? and why would a man kill her when she’s pregnant? Let’s find out.

3.) Open with Visuals and No Dialogue

Visuals without dialogue openings are used to isolate the audience. Whenever you take away anything all other senses become stronger. In this case, no words are spoken just music and imagery or no music.

What the reader is introduced to is the world.

Looking at any Star Wars film. You will find an introduction to the world the film lives in. The stars are always interrupted by a terrifyingly big space ship going to war, a planet under siege or an intergalactic space battle. Again starting with conflict.

What are they trying to accomplish with these types of openings? That the world is big. Very big.

A montage is a great way to open a film because it does many things for the audience.

First, it lets us know the world before the inciting incident. Second, It tells a short story about the characters. If you want to know how to write one I actually wrote a nice article with all the details. check it out below.

How to Write a Montage in Any Situation

Take a look at one famous example from the animated film Up.

One thing about this montage that makes it so special is the compression of a huge amount of time. It takes a lot of time and then compresses it into four minutes or the four first pages of a screenplay.

The montage opening may make take a little more planning and writing but if executed properly it can look and feel amazing. The only problem with this opening is its an old-school way of doing things. Montages were famous in the ’80s and ’90s. But any film technique can be used if executed correctly.

Earlier we talked about taking away senses to focus the audience. Well, with just sound the audience is going to stick to the seats and to your script.

Usually started by saying “We hear” or “SFX” like in the article I wrote on sound in scripts.

How to Write Sound Effects in Scripts

Sound is maybe the number one way war movies are started when the battle has begun. You have a sense of war happening around you but all you see are title cards. But unlike montages, this opening is still used in Hollywood today, like a lot.

Why is it used so much? In my opinion its the number one way to stager your audience. It catches them off guard. And at the same time, it forces them to stay hyper-aware of everything.

6.) Open with Addressing the Audience

There are many ways to address the audience some popular ones are:

More famous in historical films, Horror films, and every Tarantino movie. Quotes are a good way of introducing your audience to words that will get them into the mind of the movie.

A lot of voice over starts with a black screen but you can run a voice-over on any type of images. What you say will Peirce the audience’s attention since its meant to talk directly to them.

I think this is the number one way to address the audience. Since when doing this the movie essentially feels like a commercial of some sort. This is the most powerful one so if you use please use it with purpose. Because once you break the four wall it takes the audience out of the film. And sometimes It’s hard to put them back in.

Let’s see how this could be done tastefully in an opening scene.

One-liners can definitely make us laugh or cry but the best ones in an opening are to surprise or shock us.

Let’s look at this one-liner from Lord of War.

What do they do here? They do what I like to call reverse expectations.

With one line like this, there’s no build-up necessary.

Not a montage, not without dialogue, but with all build up.

Build up to who? or what?

Build up to whatever you want, but it’s better to build up to something that hasn’t been revealed. Just like the montage, it takes multiple pages to accomplish. The opening scene in The Dark Knight is a great example of building anticipation.

9.) Leave the Audience with Questions

Most importantly questions about what’s going to happen next. Which is the best place to leave an audience after any type of scene. If the reader isn’t questioning or curious about what happens next they stop reading. This way isn’t an exact specific example like the others but its something that needs to be applied to each of them to work.

What questions do we have after looking and reading about each example given above? The more questions the better chance you will have to get your reader to turn the page.

The main point is to leave them curious.

10.) Open with Telling the Truth

Anyway, you open your screenplay you need to tell the truth of the story. The truth gives your reader insight into what they are about to sit through. In all the examples above the truth of the characters and story are revealed instantly. Weather is it’s a star wars battle, a gunshot to the head, a shocking image or a one-liner All these tell the truth.

So whether you use one of these tactics or come up with your own screenplay opening tell the truth.