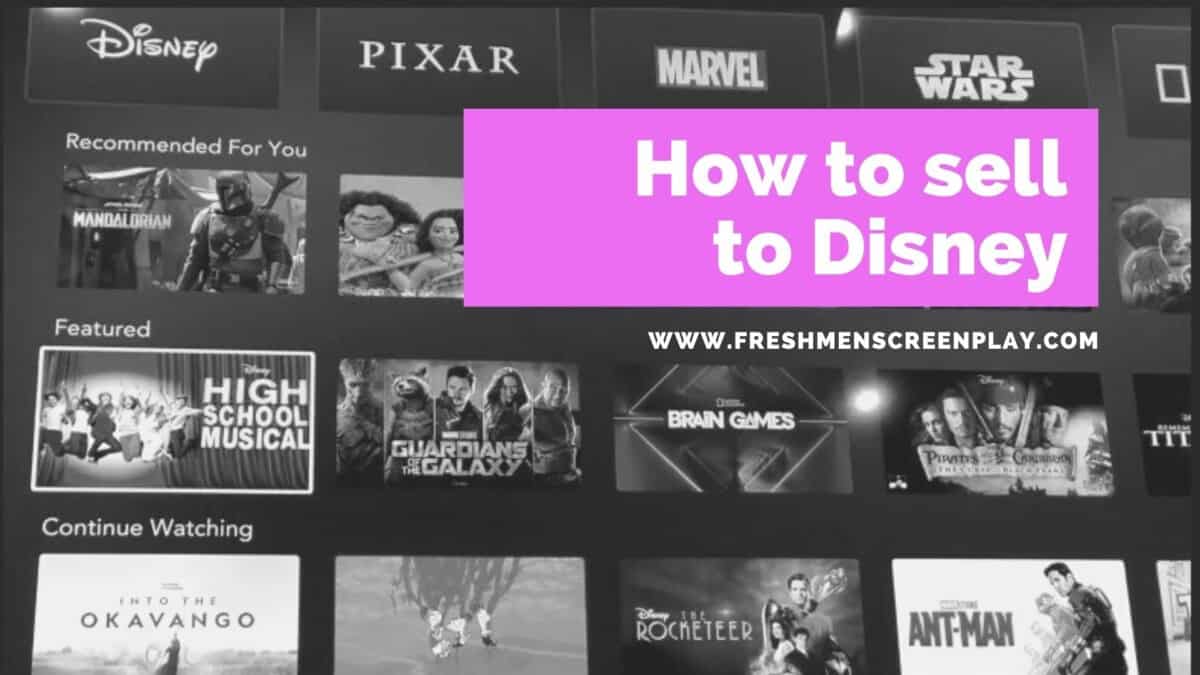 Few brands in film are more powerful and better-known than Disney.

It’s always been your dream to send one of your best movie scripts to Disney itself, but you have absolutely no idea where to start.

Is it possible to sell a film script to Disney, and if so, how would you go about doing it?

Disney does not accept scripts that don’t come from employees of their studio. Thus, you either want to know the right people to possibly land a job at Disney or win a fellowship so you can meet writers with clout who may be more willing to look over and consider your script.

Ahead, I’ll provide more information on how Disney’s internal machinations work so you can give your goals of selling a script to Disney your very best shot.

What Are Your Chances of Getting Your Script Accepted by Disney?

You may remember my post about selling your screenplay to Netflix. Although Netflix has 72.9 million subscribers per the 2nd quarter of 2020 according to Statista, even the mighty Netflix can’t touch Disney.

I’m not even talking about Netflix subscribers vs. Disney+ subscribers. I mean sheer name value alone.

Disney has dominated the worlds of animation, 3D films, television, and theme parks. Once again, I do want to temper your expectations a bit here, as there’s a pretty good chance you might not be able to sell your script to Disney at all.

As you can probably imagine, Disney receives thousands if not millions of unwanted solicitations, and accepts approximately none of them.

Since Disney is such a large brand, if they were to take on a script from just any screenwriter and the resulting film underperforms or makes them look bad, that onus is on Disney.

Like I mentioned in the intro, Disney does not accept scripts from writers outside of their studio. That goes for all the properties Disney owns, by the way, including Walt Disney Animation Studios, Touchstone, Pixar, and Marvel.

Will Winning a Fellowship Increase Your Chances of Selling a Script to Disney?

Okay, so unless you work for Disney as a writer, you can’t get your script accepted, no matter how good it is and no matter how many people agree with you that it’s good. Are you at a dead-end here?

Not at all. You can always apply for Disney writer positions as they open up. Here is a list of all the creative job positions currently available at Disney. You might be interested in applying for a job like a storyboard artist.

As you can see from the listings, a job at Disney could take you anywhere in the country, and sometimes even outside of the United States to countries like Canada and the United Kingdom.

You also should anticipate very steep competition for any role you apply to. After all, a job at Disney not only looks phenomenal on your resume, but it can make your career as a screenwriter.

Besides applying for jobs, you can also put in an application for the Walt Disney Television Writing Program.

What Is the Walt Disney Television Writing Program?

The Walt Disney Television Writing Program is an annual fellowship eligible to the US and international residents.

To apply, you need not be a Writers Guild of America member, but you have to be 21 years of age or older.

The cool thing about this Disney fellowship is that unlike a lot of similar fellowships, you don’t have to pay as part of your application. No matter your budget as a burgeoning screenwriter then, you should be able to apply to the Walt Disney Television Writing Program.

Even better is you never have to have worked as a professional writer or producer to win, but a resume is required no matter what. You also need a letter of recommendation or two, so it helps to have an agent or some option for networking with other film professionals.

Disney says the letter of recommendation can be from educators with a background in the entertainment industry as well as directors, producers, other writers, or production or studio company executives.

As great as the Walt Disney Television Writing Program is, there are a few downsides I want to talk about.

First of all, it’s in the name. This is a television writing program, not a fellowship for feature-length films. Is there a chance that you could get a job as a TV writer and then make the jump to writing movies? Sure, but you won’t be starting off doing what you want.

Also, even if you did want to apply for the Walt Disney Television Writing Program, the deadline for 2020 was June 3rd. You’d have to wait all the way until next year to apply, which is definitely a bummer.

A Possible Loophole for Selling a Script to Disney

You’re not the first screenwriter who came up with a well-done, heartwarming script that you thought would make the perfect Disney or Pixar film.

You certainly won’t be the last, either. Many writers have found themselves in your shoes, pondering what they can do to get on the fast-track to Disney screenplay acceptance.

The rules are rules, that Disney only wants its own hired writers to produce movies and television content for them. That said, there’s one possible loophole I figured I’d mention. It’s a longshot for sure, but hey, maybe you can make it happen.

If you think about it, many, many Disney films are based on books, typically old fairytales. I won’t go through them all, but a few of the best-known titles include Oliver Twist, Tangled, The Hunchback of Notre Dame, Alice in Wonderland, The Jungle Book, and The Little Mermaid.

Keeping that in mind, there’s a decent chance that if you wrote a children’s book, it skyrocketed to bestseller’s status, and it became extremely pervasive that the film studios would come to you rather than vice-versa. One of those studios could be Disney, who would want to buy the rights to your script and use it as the basis of a film.

As a caveat, many of the source material used for the above Disney films is not at all what the movies turned out to be.

In the original story that inspires The Little Mermaid, Ariel kills herself after she can’t bear to kill the prince. In the original Hunchback of Notre Dame, almost every character dies. None of those story plots are in the respective movies.

So even if you managed to get your screenplay adapted into a Disney film, it might not be quite as recognizable as you were hoping. Still, it’s better than nothing!

Other Options for Your Script Besides Disney

You may have given it all you had, but you weren’t able to become an employee of Disney this time, which means they’ll likely not have a chance to read your script.

This doesn’t mean you should throw your script away or hide it in a dark corner and never look at it again.

Instead, you might want to shoot for smaller film studios or set your sights on a non-Disney animation studio. Plenty of such options exist. Here’s a list to get you started.

Animax Entertainment works with such clients as WWE, Sesame Workshop, National Geographic, Warner Bros., ESPN, and Disney. They’re a bit of a big fish, but an option nonetheless.

Based in Austin, Texas, Powerhouse Animation Studios, Inc. specializes in 2D animation as well as movie and TV show illustrations, digital paint, art assets, motion graphics, and motion comics. They too have worked with Disney at multiple points.

Are you a Star Wars fan? If so, then you might want to look into selling your script to Industrial Light & Magic. This long-standing animation studio, founded in 1975, is owned by George Lucas.

I’d also suggest shooting for Fuzzy Door, once known as Fuzzy Door Productions. This Seth McFarlane-owned production company was founded in 1998 and produces all the McFarlane shows, such as American Dad! and Family Guy.

Selling a script to Disney is not going to happen unless you work within the company as a writer. Sending an unsolicited screenplay is definitely the wrong way to go about getting your work seen, as your screenplay will end up in the trash.

If you can win a Disney fellowship or otherwise land a job with the company, you could eventually work your way up to writing films for Disney.

If not, many other great animation studios abound that might be more receptive to your work. Good luck!

Is there anything I missed?

What rout are you going to take?

What ever your answer is let me know in the comments