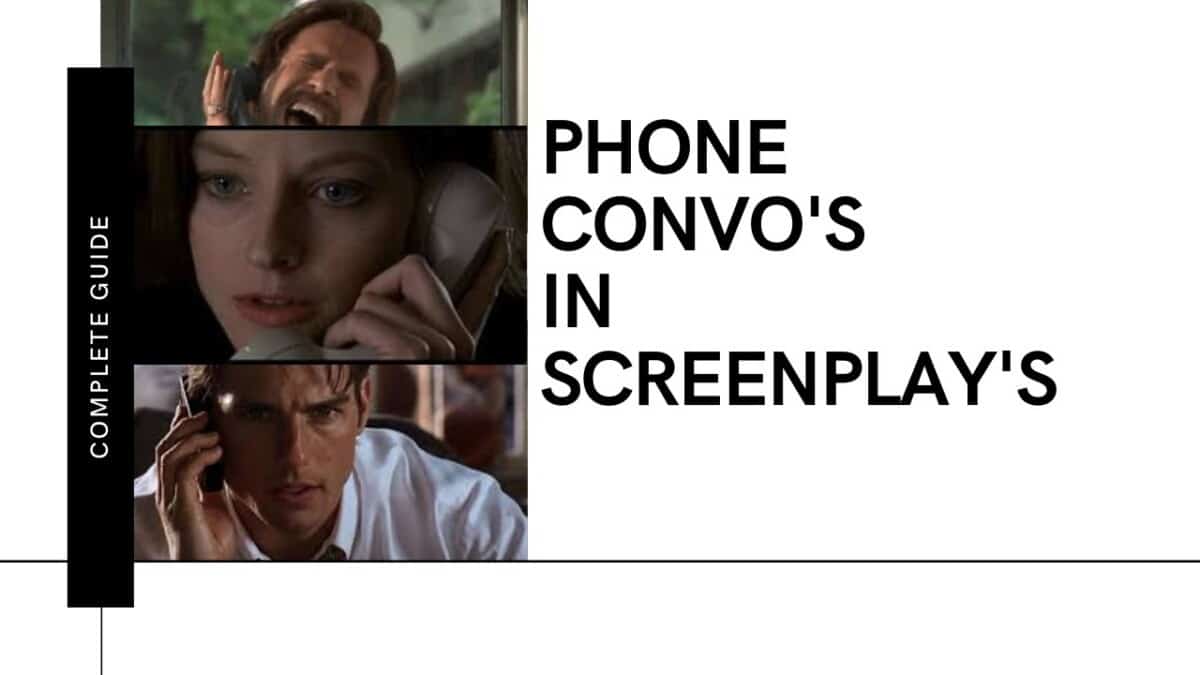 Phone conversations and texting are now messed with our lives.

It’s only natural we want then in our films.

But how do you write it? How do you get that ear-popping dialogue through the phone and on a page?

From there you can write dialogue as you would typically write it.

Is what your trying to write a one-sided conversation, or can we hear the other voice?

Let’s explore all the options below.

How to Write a One-sided Phone Conversation in a Screenplay

A one-sided phone conversation is what we normally hear.

Next to people who are talking on the phone as long as they’re not on speakerphone.

After the conversation is over, you can end the scene and leave your character on the phone, or you can write “(Character name) hangs up.”

Most dramas don’t have the person end the scene by hanging up the phone they just cut to the next scene, but it’s totally up to you and your vision.

Why Would you Write a One-sided Phone Conversation?

Now before going off and writing a one-sided conversation think of the phycological effects, this has on a reader.

They don’t know what the other person is saying.

From here, you see a lot of movies reveal the results in the next scene.

But even if you don’t, you can hold those questions over an audience’s head for as long as you want.

As long as you know, you need to answer those questions eventually unless the phone call comes at the end of the movie like a cliffhanger.

As you can see in the above clip. The only information you get from the other side is some slight breathing and two words.

Play with the information, on the other hand, choosing what to give and what, not to the reader.

How to Write an Intercut Phone Conversation Screenplay

The intercut phone conversation is a little harder to handle formatting-wise.

But because of this, you can have a little bit more fun creating it.

You can then write your conversation as normal, and the reader will picture both locations while reading.

When finished an intercut phone conversation you would want to write

If one character hangs upon another.

When writing “END INTERCUT” You then have to write another scene heading, letting the reader know which characters we are looking at now.

Remember if you want a character to talk when that character isn’t shown you have to write “Character name (O.C)”

Why Would You Write an Intercut Conversation?

As you can see from the example above, more perspectives equal more information for the audience.

If you want the audience to understand how not just your main character feels about the information exchange but the other character or party as well. The intercut phone conversation might be right for you.

Why is this phone conversation famous?

You can tell without much dialogue and not even seeing the movie that the two men are unsure of who each other are. Or their position.

Matt Damon tries to make up a story, but Leo isn’t falling for it.

The lesson here is you choose how much dialogue is given. Remember, action is always better than words.

Not just because of the formating but because you have to remember each person’s position.

This becomes even more difficult with multiple people meaning more than two.

How do you write a split-screen phone conversation in a screenplay? You write a split-screen phone conversation by first establishing the locations of all parties involved and writing there the first piece of dialogue. Once all parties on the phone have been introduced, you write “SPLIT SCREEN — PHONE CONVERSATION” or “SPLIT SCREEN with (X) and (X) and (X) .”

Another way to write a split-screen phone conversation in a screenplay is to use “/” to represent the split.

Might be simpler, especially if you’re dealing with three or more people on the phone.

If more than two people are talking on the phone. You can write:

Then when the phone conversation ends you write:

As always, please reintroduce the location of the character you want to show after the phone conversation is ended. Or start a new scene.

Why would you write a split-screen phone conversation?

Mostly used in comedy movies because people might feel a comedic tone even if you’re not trying to be funny.

The comedic split-screen conversation has been built up over decades and isn’t likely going ot change in one movie.

With that said, there had been movies to take the split-screen conversation to a new level.

“Unfriended” is a horror film where the entire movie is a split-screen conversation and nothing about this film is funny.

After analyzing this movie, the reason the split scene worked here without a comedic vibe is that the split-screen went digital.

Changing the method and taking it off the phone and adding skype allowed the screenwriters to reinvent the split-screen.

Other than that it’s the fastest way to give information as well as provides the most information to the reader and the audience.

Every movement the actors make gives more of an insight into how the characters feel about what’s happening.

A famous example is this scene from “Mean Girls.”

How to write a Phone Voicemail in a Script

Ok now, you’re a master at writing phone conversations in a script. the only thing else is to do is to practice.

Which technique are you going to use?

Whatever your response leave a comment I would love to talk about it.