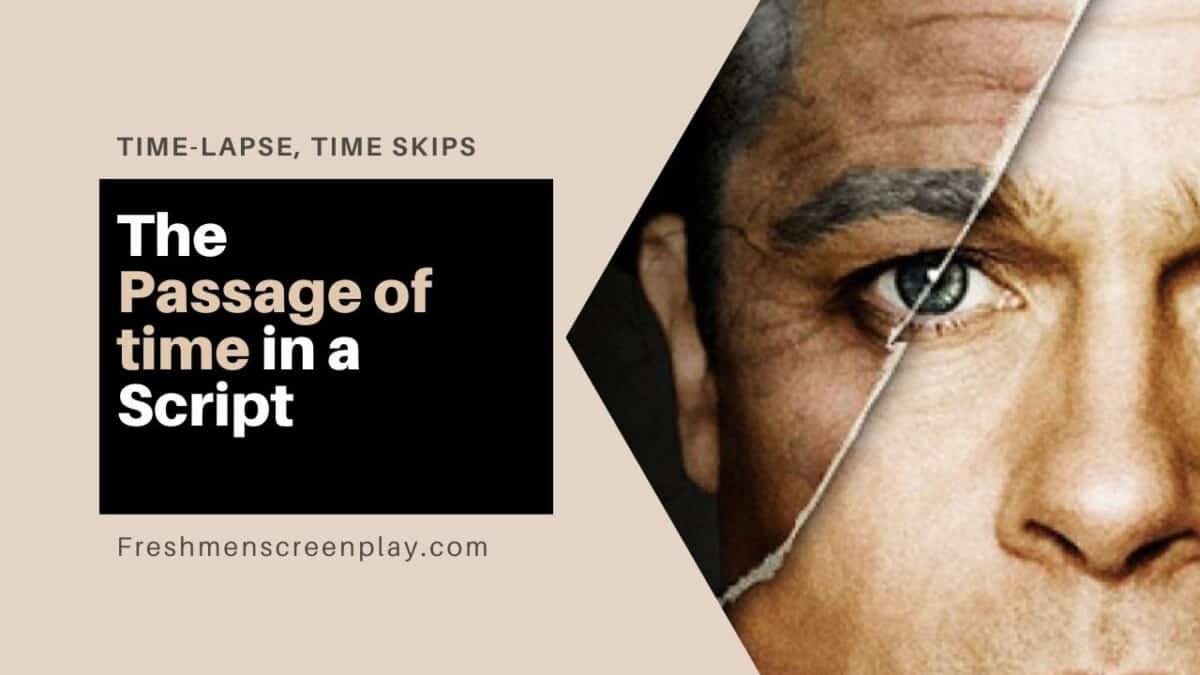 Passage of time, time skip, time-lapse whatever you want to call it it’s all the same.

How to Show the Passage of Time in a Screenplay? You show the passage of time by indicating the passed time at the end of the scene heading. If one year has passed you would write “ONE YEAR LATER”

If a couple of minutes passed:

You get it, right?

But this is only if the time that has passed happened in a new location. What if it was the same location.

How to show the passage of time in the same location?

The same rules apply as the first example you can write “DAYS LATER”, “SOMETIME LATER” etc.

Now that you understand. I want to show you every way possible to pass the time in your script. Some ways are even easier and less intrusive to your reader’s eyes. Keep reading.

Six more ways to show time skips in a screenplay

1.) The Scene Heading passage of time

Check this article out here for all the rules of a scene heading.

Normally you would want to avoid using anything other than DAY or NIGHT but when trying to show time passing it makes sense to take advantage of others like:

Check this article out here for all the rules of a Superimposition or SUPER it’s sometimes called.

You can use a SUPER at any point to show time has passed. It’s best used for large gaps in time ie months or years.

There are several ways to move your script along. One way is to use the following:

These normally occur on the right side of any screenplay. They serve as a jump to a new place but also can appear to jump to a new space in time.

Sometimes it’s not necessary to use a subheading or a heading to give the reader an indication that time has passed. You can do it right in the description.

This isn’t the usual way to do it but it’s effective all the same. Make sure you capitalize the word timelapse so the reader can firmly understand what your trying to do.

I did this in my last feature. I used dialogue to show time has passed. It can be considered exposition so be careful how it comes up. It’s best to use it in the heat of conflict so the reader gets the information without taking them out of the story.

This was on page 75. Between a husband and wife arguing about how to parent their children. You find out that weeks have passed when the husband Alec Asks about his wife’s Haira’s whereabouts. Insinuating she’s cheating on him.

The reason it works here is that It’s during conflict.

5.) A Montage Shows the Passage of Time

Yes, we all heard of montages in the past. It seems a little old school I know. That’s because it is.

If you want insight on how to write a montage click here.

Check out a recent passage of time using a montage one from the Pixar movie up.

The most important thing you do no matter what method you choose is to establish a pattern. Meaning uses the same method every time. This keeps consistency in your writing and keeps the reader engaged.

This doesn’t mean you can’t use two methods above for different ways for example a montage on one page and a scene heading “LATER” on another. it just means stay with those two throughout the script.