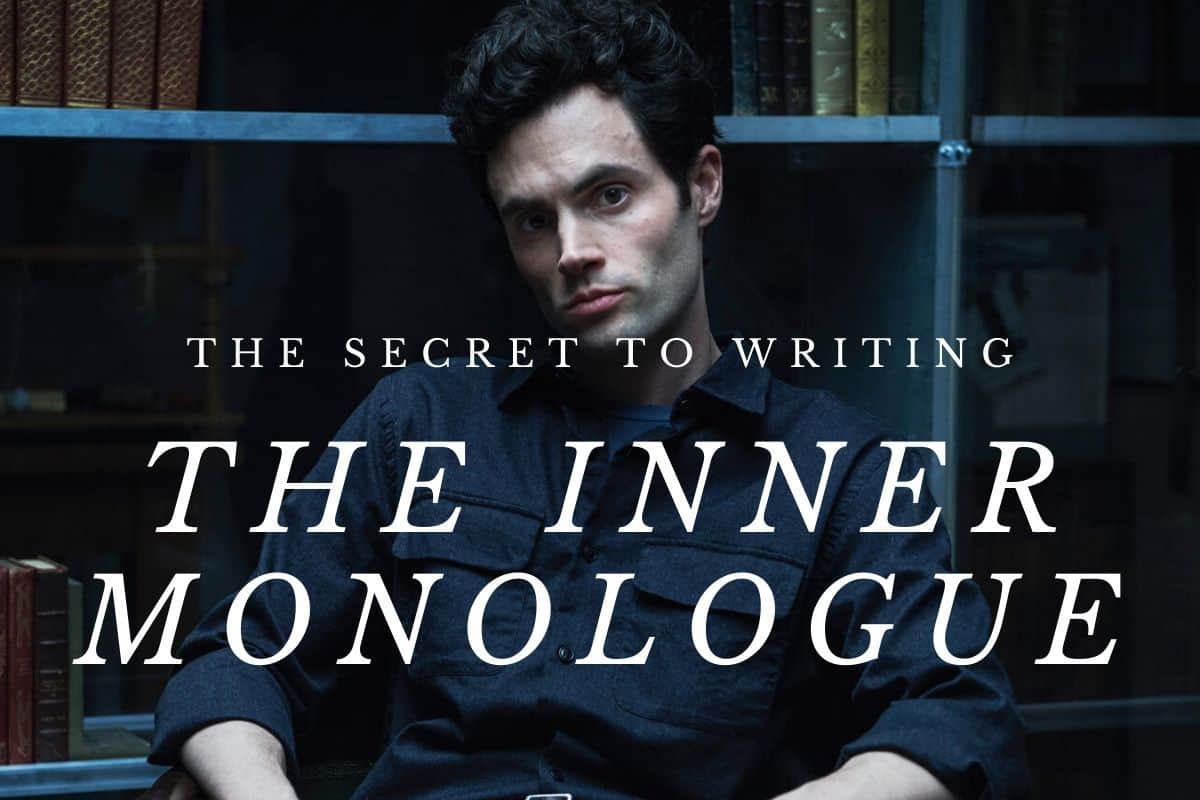 You know that voice.

That voice in your head that you’re using to read this right now.

How do we get that voice onto the script in a way that readers will understand?

Now there are multiple ways to write this that could add some flare to your writing. Check out those examples below.

Yes, there are different ways to write an inner monologue. The first way is shown above and is a great basic example. We have some better script examples we can pull from recent famed Netflix dramas. One is “You” the other being “House of Cards.”

As we can see the inner monologue is more of a character in itself. It’s written as its own voice a lot of the time separate from Joe Golberge the main character. Throughout the series, you can hear this voice and then see Joe spring into action after his thoughts made a decision.

One way to justify the use of the interior monologue is to make it its own character. This script almost needs this voice in order for the story to work.

“Characters name”
(to the camera)
The monologue is italicized

The formating here comes from what we are used to seeing in novels but it works all the same.

This example in House of Cards doesn’t feel like a new character but instead Feels like a different side of the same person. This version is still an inner monologue because only we the audience can hear it.

Throughout the series sometimes the main character Frank would be in a room full of people and even then the only people who hear this version of him is us.

One thing you can see from the two examples above is the inner voice is clearly defined formatting-wise. There isn’t a question whether this is something everyone in the world can hear or only the audience. We know only we can hear it. Keep that in mind when writing.

Why you should or shouldn’t use interior Monologue

Now let’s go into detail on the pros and cons of using this technique for your next script. Not every script needs this.

Why You Wouldn’t Use It.

One of the most important rules in screenwriting is to show don’t tell. The rule is meant to force writers to write visually. When you use inner Monologue you run the mistake of adding more than is necessary making for a boring script.

This is why the two examples shown above have the interior monologue function as part of the show and not something the writer threw in to get a point across.

David Mamet a teacher of screenplays tells us that narration can kill a script faster than anything. Your screenplay can turn into a weather forecast giving the audience everything they need to know before any of it happens.

So if not done right it could be the reason a reader didn’t pass your script along to the producer.

Why You Would Use It.

Both examples of the inner dialogue given above show character in a way that works well for the story. Think to yourself how does display an inner monologue good for the character. What is adding to the character that I can’t show anywhere else?

Having your character monologue is a great way to show their point of view or POV. It’s literally what they’re thinking. You can show how situations make them feel on the inside. Which is relatable to most people.

Exposition is something all writers struggle with. Inner monologuing gives a writer another way of spitting out exposition. This way you can separate the exposition throughout more characters if you count the voice inside your character’s head as a character itself.

When Should You Use The Interior Monologue?

Even though it’s inside someone’s head it’s still dialogue. And the dialogue is best given at the height of the conflict. It’s the “Oh shit” moments or the “fight or flight” moments. The moments when steaks are at their highest. That’s when a line or two coming internally would really stand out.

We have covered all the bases of using inner monologues. From how to format one. The different ways its formated and used in scripts today. Even to when and why you should use it. But remember before you use any technique in writing ask yourself does this serve the story or is it serving me?

For more formating tips please check out the formating section below.

How to Write and Format Interior Monologue in a Script
Posted in Formating Help By D.K.WilsonPosted on February 5, 2020October 5, 2021