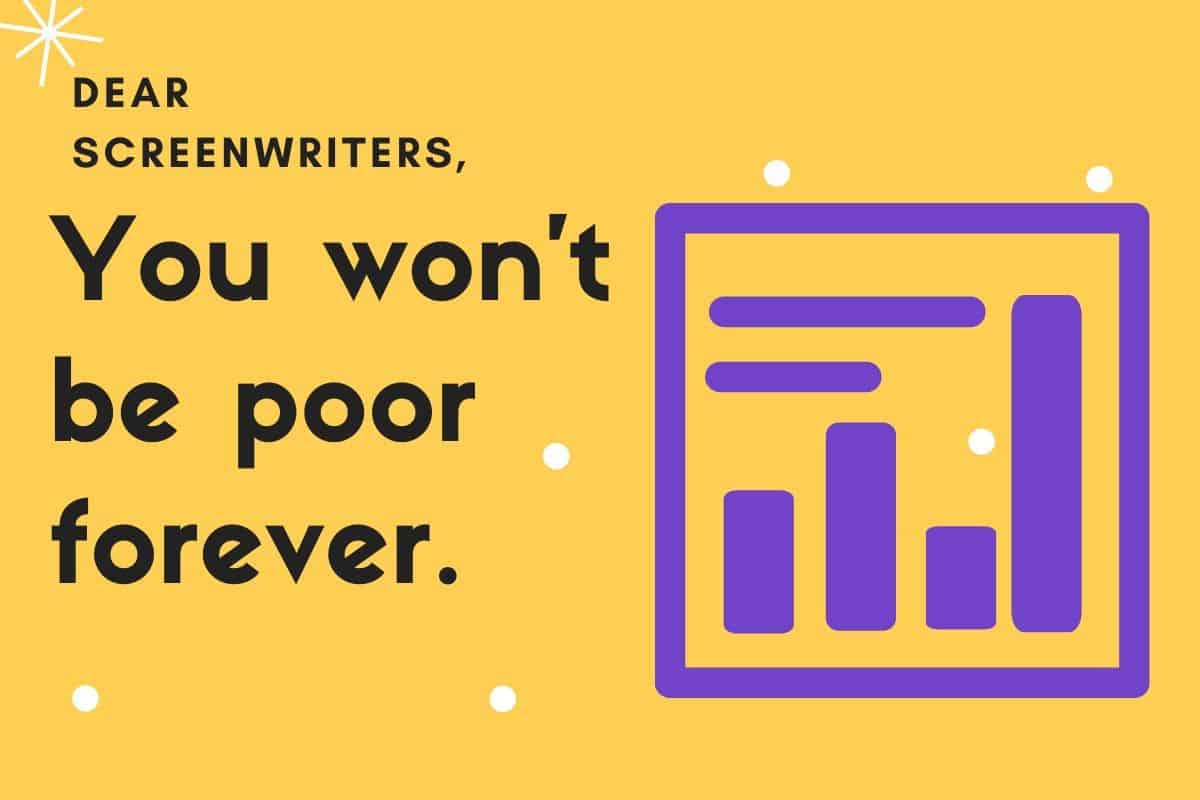 Being a screenwriter is not the most glorious job especially if you’re an extrovert.

You sit in a room most likely alone with one computer. waiting for that big check after selling your script. But what if you don’t sell anything the next year? Where do you get money from?

But these numbers are just a base. Writers can get more based on DVD sales and reruns overtime. Keep reading to find out.

Yes, screenwriters get paid residuals from there past work. But only credited writers on produced projects see any type of return. If the film or tv show was never made but you might have gotten paid for your work but no residual money will follow.

You need to credited with at least one of the following credits to be able to receive residuals.

If you’ve looked closely on the intro credits to any show or movie you’ve probably seen at least one of these credits listed. That writer under the credit gets a check every time that movie or TV show is played.

Say for example you share credit with another writer or a couple of writers. The residual payment is split amongst all of you. This isn’t so bad if the movie makes 100 million or even 20 million. These are good signs it will play on TV and streaming platforms later bringing you even more residual income.

But if the movie flops then I hope you have another script you can pitch to your agent.

Most writers I meet have a feature film idea they are looking to sell. But what does the residual income of a feature film writer look like? We have that information below.

1.2% of the distributor’s gross income. For movies that hit the theatres.

What does this include?

Basically, anything that can have an ad running during before or after the movie counts on your residual check.

Unfortunately, no residual payment is made to the writers outside of America including flights. For example, Fast and Furious is a big franchise. Writers Chris Morgan is the credited writer for a lot of those films. What the film makes worldwide isn’t of concern to Chris just what it does in the states.

Let’s work out an example here.

Get out a popular film released in 2017 written by Jordan Peele.

Since Jordan was the sole writer on that project he doesn’t have to split the residual earning.

Over two million Jordan peel got over the entire box office life of his movie. not including the T.V or streaming runs. Or the producer and Itunes income. But if I had to guess its somewhere closer to five or six million.

T.V screenwriter’s residuals work slightly different and a little more complicated. But the main difference here is T.V. writers receive residuals for overseas viewing of the show. This could be arguably better.

Now with this said they don’t get this amount of money for every showing of each episode they write. Each rerun grants you a lower and lower amount of money each time. But for both prime time and low budget TV that percentage doesn’t drip below 5%.

The left side is for Primetime and the right is for lower budget T.V.

How Do Writers get Residuals?

How do writers get residuals? Screenwriters are awarded residuals through the WGA (Writers Guild of America). Every month the WGA sends out thousands of checks to writers for there past projects based on the number we discussed above.

The W.G.A was founded over 70 years ago to ensure that writers get proper compensation and credit for there part in the creation of stories for film and Television. They negotiated the first residual paychecks in 1953.

When Do Writers get Residuals?

For TV writers they receive a check every 30 days in a green envelope and for Feature film writer they first have 60 days according to the schedule of minums released from 2017 but I believe now it might be pushed up to 30 days.

But for more information please check out the WGA website or call the WGA Residuals Department at (323) 782-4700 for details.

Please note that all the numbers listed above are for the 2019- 2020 season each year these numbers increase for T.V writers only because there base pay increases. And the residual pay is based on the there first initial check. As for Feature film screenwriters, residual payments stay the same. But maybe in the future, the guild will have reason to change that.

How much do Film and TV Writers Make?

Do screenwriters get royalties?

No, royalties are given to owners of intellectual properties. Since screenwriters don’t publish screenplays they get residuals. With that said they do receive 0.65% of the revenue of a purchase. when the film is sold on say Itunes.

Do screenwriters get a percentage?

Do staff writers get residuals?

Yes, Staff writers do get residuals. They can get an average of $10,000 to $30,000 depending on the network and the credits they received on the project. Thanks to the WGA this number increases every year.

Do Screenwriters Actually get Residuals In Hollywood?
Posted in Industry Knowledge By D.K.WilsonPosted on February 7, 2020May 9, 2020